We’ve driven past this restaurant a hundred times but never stopped. “We have to try that place” is the usual lament. By the time you see it (heading southwest on Lee Highway), the left turn for the parking lot is behind you. But we finally make the turn (left, as noted — directly across the street from Circle Woods Drive) and give it a try.

Maybe “Royal” in the name should have clued us to the regal setting within, but the outside signage did not. It looks like a lunch buffet-type spot, and indeed they offer one. It is also much bigger than it appears from the street, and among the best-decorated Indian restaurants we’ve been to in the U.S. There’s a separate, wood-paneled bar area where you can be plied with limited beverage options. 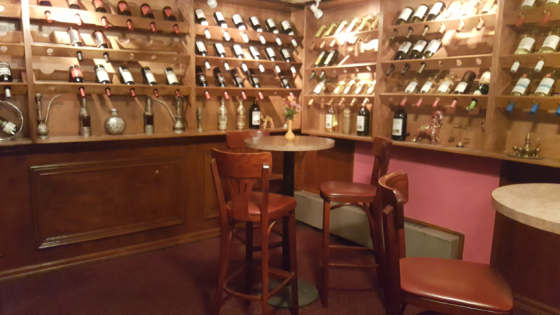 Placing a go-order on the way, my wife discovers Crab Pudina on the menu. The dish consists of patties of crab meat, potatoes and mint mashed together, then lightly battered and fried. (“Pudina” is Hindi for spearmint.) I expect it to have the consistency of pakora — deep-fried and crunchy throughout — but these patties are more like potato-and-meat croquettes. That is, they’re as soft on the inside as vegetable samosa but wrapped in a thin patina of flakiness. The taste of potatoes and mint overwhelm the crab (in the long tradition of more expensive ingredients taking a back seat to less expensive ones), but it’s rare to see crab appetizers — much less so many shrimp, prawn, salmon and catfish entrees — on an Indian menu.

We normally avoid Indian (and Bangladeshi) fish dishes, having had too many bad experiences with plates of whole-body, bone-in fish, with a glassy eye staring up — but will try more of them here for the novelty and preparation styles. (Disclaimer: We have not yet tried the other fish dishes, just the crab appetizer — inquire ahead about what to expect.)

We also order the Lamb Saagwala, or seasoned lamb in curried spinach, which it comes with Basmati Rice; the Chicken (“Murgh”) Tandoori; and Garlic Naan. The tandoori is a whole bird, bone-in and juicy. The naan is a bit chewy for me, but that’s naan, and it tastes fresh. I don’t see papadum on the menu (doesn’t get much crunchier than that), but then I do — Papad, or crackers made from gram lentil (urad) flour.

Everything is good, even as a go-order, so we’ll be back to try some of the more creative options in-house. It’s a bit pricey, but maybe not so much considering the generous portions. Despite the ordinary appearance from the street, Jaipur is one of the best Indian restaurants in the area. Glad we finally stopped for it.