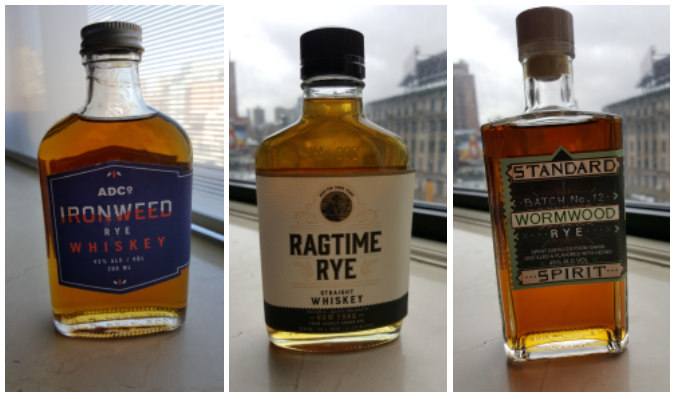 We’ve got three hip-flasks of rye whisky from New York state to review tonight, as mentioned in our entry on Black Dirt Bourbon. We picked them up on our trip, last year, to Manhattan. The original plan was to taste each one, neat, then sample three homemade cocktails: a Sazerac, an Old Fashioned, and a Manhattan. The plan changed when we got to the last of the three bottles, though — the Wormword Rye. We’ll explain below. In any case, this post has been months in the making and we’re excited to finally have had a chance to sample these three NY-state small-batch ryes.

It’s hard to tell from the photo at top: Each bottle is a scant 7 ounces (200 milliliters). So each is good for three drinks apiece; that’s why they appear more than half empty in some of the “after” photos. But before we even crack them open, we notice something of interest about the Ragtime and Wormwood bottles: Each wears a single label that wraps around the side, so that it covers both the front and back (and one side). So what? Well, if you’re machine-labeling thousands of bottles on an industrial scale, they get “stamped” with a sticker on one side, then another sticker on the other side. But if you’re labeling bottles by hand, as is typically the case with small-batch varieties, a one-and-done motion is quicker and easier, ain’t it? Get the sticker lined up straight on one side, wrap it around, and it’s straight on the back (or front) as well; then onto the next. No idea if that’s the case with these particular craft concoctions, but it makes sense.

It’s a minor observation but we noticed it because the Wormwood bottle is unique: Rectangular with thick glass, sturdy in the hand. Compared to most liquor bottles this size, it feels like a sugar bowl. We’re going to save this one for last.

There are no winners or losers in this lineup, each of our picks turns out to be solid. But let’s judge anyway.

We start with the Ironweed Rye. It’s 86 proof, aged nine months in oak and, like all the Ironweed distillery’s offerings, made from ingredients sourced exclusively in New York State. It’s hard on the nose with a chemical astringency, but sweet and more complex on the palate. We mix it as a Sazerac but, unforgivably, forget to bring home an orange or clementine for the garnish. So no photos.

Next, we try the Ragtime Rye. According to this article at The Whiskey Wash, it’s made from 72 percent rye and 16 percent corn, the remaining 12 percent being malted barley. Aged at least three years in oak, it’s bottled at 90.4 proof. It looks thin and yellow in the bottle, like it’s going to be drain-pipe watery, and carries an intense alcohol scent but a complex, if not delicious, taste. We mix it as an Old Fashioned, garnished with a couple twists of clementine peel. It’s a good drink — the sweet, spicy rye mixes well with and adds a distinctive kick to the mix. We like it so much we pose the drink a couple ways. 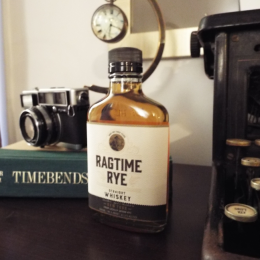 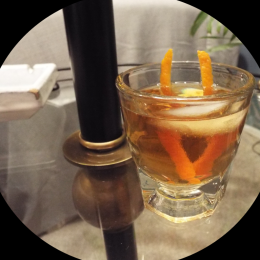 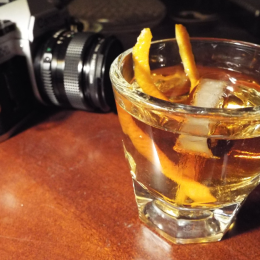 We save the Wormwood for last. The main reason for not having tried it sooner is that I like the bottle so much that we displayed it on our bar, rather than pull the cork.

It has toffee on the nose and, initially on the palate, hints of chocolate, followed by the distinctive taste of absinthe. It’s also spicy. I wrote “absinthe” and “medicinal” before reading, here, that wormwood (an herb) is a primary ingredient in absinthe and has been used medicinally to treat all kinds of conditions. (I’d read that before, and forgotten it.) As for the rye, the finish at first is astringent, acidic even, though this isn’t surprising for a 90-proofer that’s “unfinished with natural sediment,” according to the label. The long finish is smokey, with musk and the odor of shoe-shine polish. This rye is to whiskey what a robusto stogie is to cigars.

The Wormwood Rye easily wins in the cosmetic category (if there were such a category), with its warm, rich color and squarish art-deco bottle with wrap-around label. We had originally planned to make a Manhattan with this one, but having sampled it, change our minds… We returned from New York City with just one 200-ml bottle, and this whiskey is too distinctive to standardize according to a cocktail recipe. If we had more of it, sure, but we’ll save the last 100 ml to enjoy on its own. When we sample it next, we’ll pour it in a glass stained with Evan Williams to soften and further complexify the whole thing. Not a cocktail, exactly — a method. Now that will be caramel and toffee and leather.

A final decision: Do I keep the bottle as-is, with label intact? Or do I try to peel off the label to keep this cool, blockish flask? If the latter, then there is no turning back — once you start peeling, you must remove whatever gunky residue may insist on sticking to the glass. Or maybe it’ll peel away without a fuss. Emboldened, perhaps, by the 90-proof sip, I peel. The label doesn’t want to cooperate with or respect my aesthetic preference. It hugs the bottle with a sticky determination, but I’m all-in at this point. I take another sip and persist.

My secret weapon in this kind of project is Goo Gone, one of the greatest household chemicals ever invented. Since discovering this stuff in 2009, I’ve never been without a bottle of it. We have to hit the road today for a weekend trip, but when we’re back I’ll post the before, during and after pics.

Wormwood-infused rye at 90 proof is not for everyone, obviously, or even for every whiskey aficionado. I prefer the taste of Evan Williams, frankly, for being subtler and more refined. But it is a unique novelty item in the category and definitely worth trying. When it’s all gone, I’m going to refill the bottle with Evan Williams for display on the bar.

More:
♦ Serious Eats: “Five Essential Rye Cocktails”
♦ Whisky.com: “Your Tasting at Home”
♦ Articles in The New Yorker and The New York Times on absinthe, from 2006 and 2009, respectively.