It’s time for another visit to Eden Center, as we wanted to review at least one more restaurant here before this blog’s first birthday (which will be New Year’s Eve). We launched with the idea of — eventually — reviewing every restaurant at Eden Center. At this rate, we’ll complete the mission in, oh, about thirty years. Why so slow? The traffic pattern at Seven Corners; more on that in a future post.

For this review, we choose one of the most highly-rated restaurants in this Little Saigon village. It has an extensive menu from which we order Ốc Len Xào Dừa (snails with coconut cream) and the Imperial Autumn Rolls, which the menu describes thusly: “Crispy rice thread wrapper filled with marinated minced prawn, crab, taro, and yam combined with added spices and wrapped into rolls.” For all of that, you’d think we might know what to expect — but no. You grab the prawn tail and dip the wrapped, fried concoction in a slightly spicy orange marmalade sauce. It’s crunchy, not too oily, and pretty original. 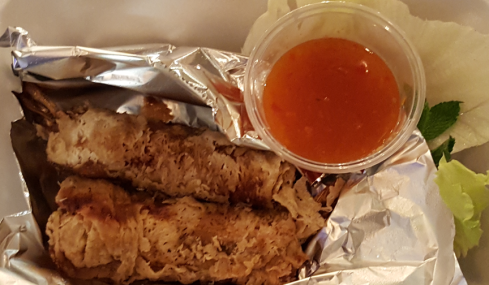 The soup is even more unexpected — a bowl of seasoned coconut cream with scant vegetables and dozens of snails, still in their hard shells. The idea is that you suck the snail meat out of both ends of the shell, fat side first. For all the effort, we don’t get much payoff — but never having sucked both ends of a snail before, maybe our heart just isn’t in it.

There’s also lẩu — Vietnamese hot pot, served here as a group meal — and phở, and pretty much every subcategory of Vietnamese cuisine with which we’re familiar except banh mi. (For that, try Nhu Lahn, just around the corner.)

We’d recommend this place for its authentic cuisine — McSaigon this is not — and to the more adventurous or just plain curious. And the Bánh Hỏi Gà Nướng Chanh aren’t scary (Grilled Lemon Chicken Skewers with Steamed Vermicelli). In any case, definitely try the Imperial Autumn Rolls.