We won’t reveal where we found this brew (okay, Westover Market). We were looking for a nitrogenized beer, having recently been disappointed by a bottle of stout that proved flat. We won’t name names, shipping happens. But that wasn’t the case with this interesting, complex pumpkin ale from Southern Tier.

An “imperial” beer — be it an ale, stout, pilsner, etc. — implies a heady boldness. The imperial style might present as lush mouthfeel, sharp heaviness, or bigness of flavor, but in any case is brought about by heavy malt and/or hops. We taste this one blind, with no idea what to expect except that which the packaging promises.

The lid pops open with a loud hiss and our hard pour is all head — the nitrogen at work. Creamy white and malty brown, which settles quickly to an orange amber. The nose is mild pumpkin spice, the taste a mildly sour pumpkin pie with musty spices (like old allspice) and hints of vanilla. I couldn’t detect any coffee — check out the video at the link below — but the pumpkin flavor is all there, and it comes across as natural. Nothing synthetic in the taste. So hail the king of pumpkin. The beer is malty and lightly carbonated with medium-heavy lacing and a long, sour and slightly bitter finish; 8.6% ABV.

It’s an unexpected find, unique and well-rounded. We’ve been reluctant to admit that summer is over but this seasonal release eases the pain. It punches above its class and would pair well with a spicy curry or maybe the last BBQ kabobs of the year. We’ll stash an extra 4-pack in the fridge for Thanksgiving, and be on the lookout for Southern Tier’s many other craft brews.

That was to be the end of it but, after writing the above, we came across a four-pack of Pumking in regular (non-nitrogenized) bottles. Had to try it for comparison.

It doesn’t have nearly the head of its gassed cousin, of course — we’d characterize even a hard pour as minimal head and even lighter lacing — but loses nothing in the flavor profile or crisp carbonation on the palate. It just loses the initial, and pretty durable, creaminess of the head.

So you can’t go wrong with this beer in either format, though we do prefer the gas-pellet cans. We’d rate it 87 out of the bottle and give the nitro a 90.

More:
♦ Short Halloween-themed video cartoon from the brewery
♦ Happy Halloween, a week early in case you want to track it down 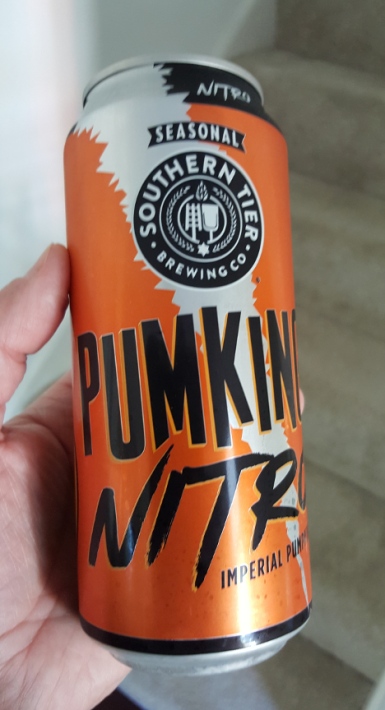 One Reply to “Pumking Imperial Ale”